You can watch the time-lapse video of our hike on our YouTube channel!

If you ever venture to Portland (or maybe you live in the area), you must visit Sauvie Island. Let’s be real, most folks only migrate to the island during the fall festive season to pick up their pumpkins and do all things related to Pumpkin Spice Lattes. We are die-hard’s for “The Pumpkin Patch,” and others prefer different farms. BUT did you know the island is SO much bigger than the pumpkin patch farms and there’s an entire wildlife refuge on the northern side? More than that, did you know there is a lighthouse out there? 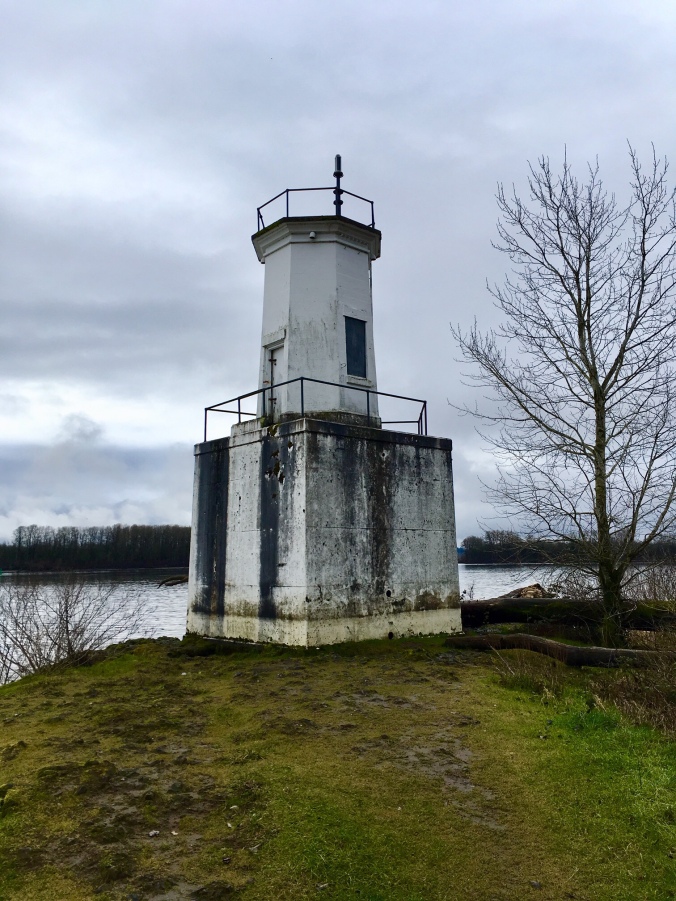 1. There’s a little grocery mini-mart just after the bridge. 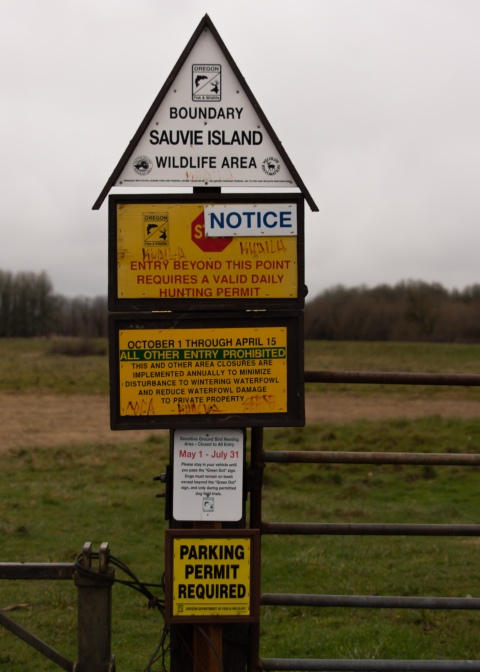 For February, our hiking destination was the Warrior Rock Lighthouse on the upper northeast side. Before we could start, we had to pick up a Wildlife Area Parking Pass at the aforementioned grocery mini-mart ($10 per day or $30 annually). There are a couple of other places to buy the pass and apparently it’s even available online, but this place was so convenient it was a bit of a no-brainer.

Once we got to the Warrior Point Trailhead at the end of a long gravel road that goes past the “clothing optional” beach, we started off in search for the smallest lighthouse in Oregon. 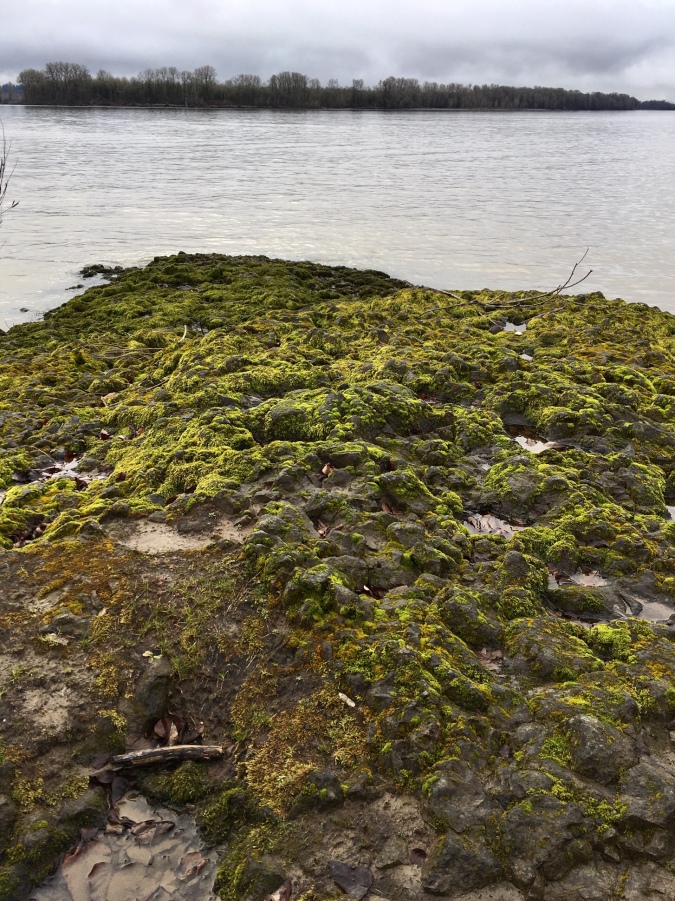 You can see it almost immediately, although it’s small and approximately 3 miles away. The trail started off kind of muddy, but it had been raining for over a week and there was an impending rainstorm coming a couple hours later. Note that some folks start on the beach and cut over to the main trail at the end of the beach, we went straight for the trail. About 1.3 miles into the hike Ben heard an eagle’s call. Just around the bend, boom(!), a freaking bald eagle at the top of a tree. We crossed our fingers it would be there on our way back so we could stop and take pictures. 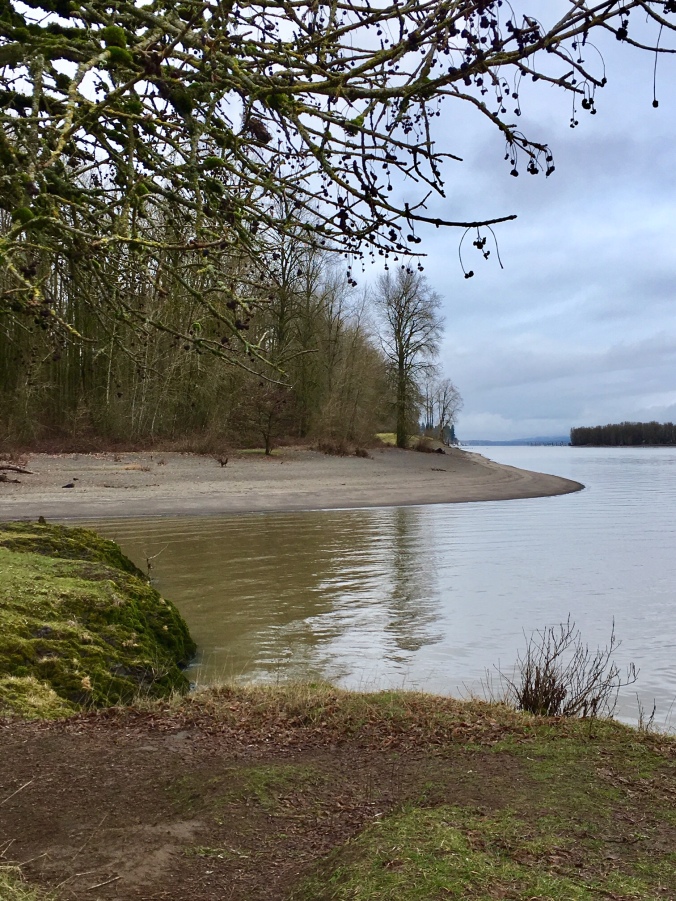 As we got deeper into the hike, the trees turned deciduous and the leaves on the path made for less mud, making it a much more enjoyable hike, since we weren’t dodging big puddles or mud pits. It was fairly smooth sailing, and we didn’t see a single soul on the way out (only kind of creepy). I could tell we had to be getting close to the lighthouse when the trail made a big curve back out towards the Columbia River. Behind me I heard, “We came around the back of it! I was NOT expecting that.” Huzzah, just in front of me, beyond the trees was the lighthouse. 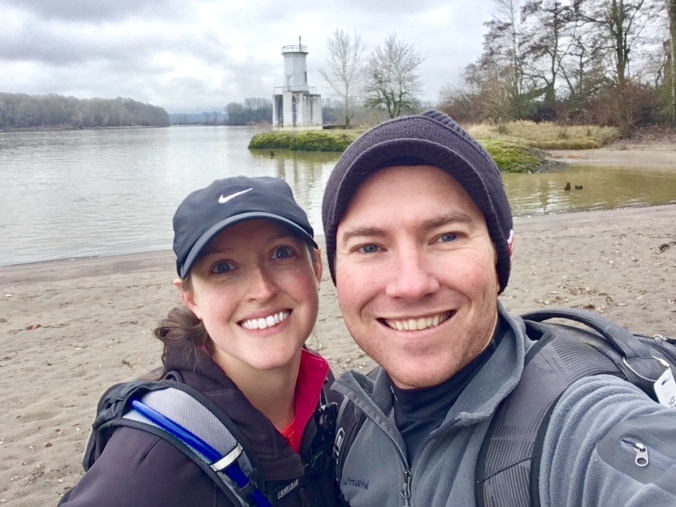 On our way back we saw a number of folks, most of them with dogs. It was nice to see friendly faces, even on such a gloomy day and the chance of rain was about to skyrocket. Just a quarter mile from the car we came across a couple of people that mentioned the bald eagle was RIGHT NEXT to the parking lot (above the porta-potties). We were ecstatic and made a bee-line for the trees! Seeing it again capped off an incredible hike.

As we were putting our gear away, the rain started coming down. Perfect timing!

Temperature: ~40F/4.4C and mostly cloudy with light sprinkles every now and again.

Where Do You Hike?

Let us know where you enjoy hiking by emailing us at: hikesfromhome@gmail.com